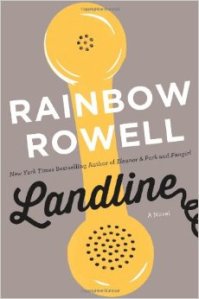 Georgie McCool knows her marriage is in trouble; it has been in trouble for a long time. She still loves her husband, Neal, and Neal still loves her, deeply — but that almost seems beside the point now.

Maybe that was always beside the point.

Two days before they’re supposed to visit Neal’s family in Omaha for Christmas, Georgie tells Neal that she can’t go. She’s a TV writer, and something’s come up on her show; she has to stay in Los Angeles. She knows that Neal will be upset with her — Neal is always a little upset with Georgie — but she doesn’t expect him to pack up the kids and go home without her.

When her husband and the kids leave for the airport, Georgie wonders if she’s finally done it. If she’s ruined everything.

That night, Georgie discovers a way to communicate with Neal in the past. It’s not time travel, not exactly, but she feels like she’s been given an opportunity to fix her marriage before it starts…

Is that what she’s supposed to do?

Or would Georgie and Neal be better off if their marriage never happened?

I really enjoyed reading Landline. It is the second book by Rainbow Rowell that I’ve read and has become my favorite so far. What I loved about this story was how Rowell carried it out. In the beginning of the book, the reader quickly realizes that Georgie’s marriage to her husband Neal isn’t perfect. While Georgie is at work, her husband Neal spends his day at home, taking care of the kids and everything around the house. But the reader is able to easily see that Neal isn’t happy with this arrangement. The reason I love these details being portrayed in Landline is because marriages aren’t perfect. And the reader gets to see this through Neal and Georgie’s marriage to each other and what happens over the next couple days.

I also love these details because Rowell shows her readers that relationships aren’t perfect. The reader can see this throughout Landline when Neal leaves for Omaha with the kids. While he’s away, Georgie feels guilty that she didn’t go with him to his mother’s house. She also begins to reflect a lot on their relationship and wonders if they were even meant to be together. Or if they would’ve been better off not getting married in the first place. I love that Rowell makes Georgie reflect on their relationship because while they aren’t perfect for each other, the reader learns from this book that if you love someone enough, being perfect with each other doesn’t matter. As long as you are willing to be by your love’s side, you will be able to conquer all of the problems your relationship brings to the surface.

I also enjoyed reading Landline because of Georgie’s relationship with her best friend Seth. While they make Seth out to be the guy Georgie was meant to be with, I’m really glad they didn’t end up together. Yes, the reader can easily see how good of a couple they could’ve been, but I feel that her relationship with Neal was much stronger than her friendship with Seth. I know that she and Seth have been friends longer then she’s been with Neal, but I felt a stronger connection between her and Neal despite their imperfect relationship. I also found Seth to be highly entertaining and funny and just couldn’t picture the two of them being together as a couple.

Landline was also an enjoyable read for me because of the different dynamics of relationships Rowell brought into the book. Not only do you have an imperfect relationship between Neal and Georgie, but the book also has Georgie’s younger sister Heather who turns out to be gay and Georgie’s mother is married to a man closer to Georgie’s age than her own. There’s also Seth, who they make seem to be Georgie’s soul mate but really isn’t. I really like that these relationships between characters are completely dynamic because it made reading Landline for me that much more enjoyable. The book not only had dynamic characters but dynamic relationships, which made the book not turn out the way the reader would expect. While I don’t mind reading books where best friends of the opposite gender end up together, it’s also very nice to see that they can also be friends without becoming a couple too.

The only issue I had when reading Landline was the ending. Without spoiling any of you, I felt as if the ending of the book was pretty flat. Yes, it did catch me by surprise because it wasn’t what I was expecting, but I also felt as if the book just suddenly ended and everything was okay in Georgie’s universe. The reader never gets to find out what happens after that Christmas and whether Georgie and Neal’s marriage does continue on and that really bothered me when I finished reading.

However, the ending of Landline didn’t make me enjoy reading this book any less. I overall really enjoyed reading this book more than I did Fangirl and can’t wait to read some more of Rainbow Rowell’s other novels.