Known as Dark Chronicle in Japan and Europe, Dark Cloud 2 is an adventure RPG dungeon crawling game made by Level 5. Published in 2003, Dark Cloud 2 centers around two characters: Maximillian and Monica Raybrandt.

An inventor and son of the wealthiest man in Palm Brinks, Maximillian works at Cedric’s shop, helping him repair parts. His adventure begins after a chance encounter with Flotsam’s Circus Troupe where he not only finds out about the outside world, but discovers that he has the Red Atlamillia, which allows him to go into the past. Monica Raybrandt is the daughter of King Raybrandt. She is the owner of the Blue Atlamillia and is sent into the past to help Maximillian stop Emperor Griffin from destroying the future after she witnesses him kill her father. Together, Maximillian and Monica work to repair the past in order to bring a brighter future to their world.

I remember as a child playing this game a lot. I had first heard about Dark Cloud 2 from a friend of mine at daycare in elementary school. Back then, I was the tomboy in my group of friends. I was the only girl at the daycare I went to who hung out with all the guys because most of the girls at my daycare I couldn’t relate to. I found out about Dark Cloud 2 from one of my friends there, started playing it, and haven’t stopped since.

I have so many fond memories of this game because it became one of my favorite games to play as a child. Now that I’m older, I’ve been playing Dark Cloud 2 with my boyfriend Zach so that I can relive all those moments of playing this game when I was little. Even though when I was younger I never got further than the second dungeon, there are a lot of things about this game that I liked even then.

For one, there are a lot of unique features this game has that I haven’t seen yet in other video games. For example, in order to recover the future, the player has to build Georamas. Georamas are a way of rebuilding the past in order to restore the future. In order to put a Georama together, the player needs the Carpenterion and Geostones. The Carpenterion is a machine that allows you to create the items you need to make the Georama. However, in order to make the Georama parts, the player needs Geostones, which holds the data the Carpenterion needs to create these parts. What I like about this feature in Dark Cloud 2 is that it is a very unique way of building items and that each Georama has its own sets of challenges that the player has to overcome if they want to progress further in the game.

I also enjoy playing Dark Cloud 2 because of the dungeons. Each floor in all of the dungeons in this game have unique monsters to fight and unique gate keys that the player has to obtain. In order to get to the next dungeon floor, the player has to fight monsters to obtain the gate key and I like that each dungeon has its own corresponding gate key that is different from all the others. I also like that each of the dungeon floors are randomly generated, which allows the player to have a unique gaming experience on each dungeon level. Another component to the dungeons I enjoy is the music. I enjoy that each dungeon has its own music that is unique to the area the player is exploring. I just find that the music in Dark Cloud 2 is beautiful and that it makes me enjoy fighting monsters all the more as I continue to play this game.

Another aspect of Dark Cloud 2 I love is building up Max and Monica’s weapons. Both Max and Monica have unique weapons the player needs to build up to make stronger weapons the player can use to fight monsters. The building up process involves synthesizing items, such as crystals to strengthen Max and Monica’s stats. Once you have certain numbers for your stats, you are able to build your weapon up to a stronger wrench, gun, sword or armband. What I love about their weapons is that they are unique. For example, Max’s main weapon is a wrench, which is something I’ve never seen in any other game I’ve played. I also like that when you build your weapon up that the player has more than one option. This allows the player the ability to have two or three of the same weapon and increase different stats for each one to make the weapon something else. I like that you have multiple options when making your weapon because it gives the player the chance to create different weapons to handle different types of monsters. 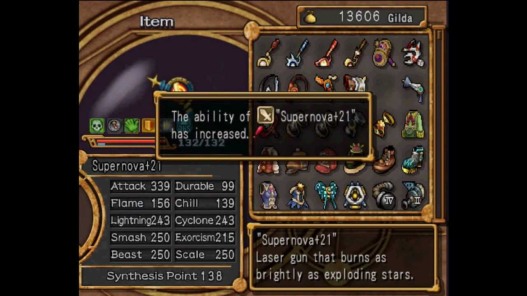 However, there are also components to Dark Cloud 2 that I don’t enjoy. These features are going fishing and playing Spheda. As a person who doesn’t enjoy fishing as a hobby, I find playing fishing in this game to be boring because it doesn’t excite me in any way. While at times it can be peaceful after finishing a tough dungeon or battle with a monster, it’s more of a hassle to do. Especially when you first start playing Dark Cloud 2 before you have Fabio join your party. Spheda is a video game version of golf. The goal of Spheda is to hit your ball, which will either be blue or red, into the red or blue hole of the opposite color. If the ball and the hole are the same color, the ball will just bounce off the hole. However, the player only has a certain amount of hits they can do before the time distortion disappears. While Spheda can sometimes be fun to play, I find that I don’t enjoy it as much because it’s more of a pain to do. One of the reasons Spheda is a pain to play is because the player has to clear the dungeon floor of monsters before they can even play. Another reason I don’t like Spheda is because there are so many rooms for error that sometimes trying to clear the time distortion isn’t even worth it.

While playing Dark Cloud 2 with Zach, I’ve been able to discover my love of this game over again. I remember why I played this game a lot as a child, even though I never progressed as far as I have now that I’m playing with another person. Playing Dark Cloud 2 again is such a wonderful experience. I am glad that I am creating such wonderful memories with this game again that I’ll be able to look back on with fondness and a happy heart.