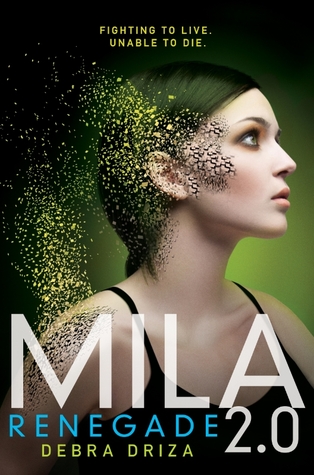 There is no one left for Mila to trust. Except for a boy she barely knows.

But Hunter has no idea who—and what—Mila really is. She can’t bear to reveal her secret, even though he’s unwittingly joined her search for Richard Grady, a man who may know more details of Mila’s complicated past.

Yet the road to the truth is more dangerous than ever. With General Holland and the Vita Obscura scouring the earth for her whereabouts, Mila must rely on her newfound android abilities to protect herself and Hunter from imminent harm. Still, embracing her identity as a machine leads her to question the state of her humanity—as well as Hunter’s real motives.

While I wasn’t completely sure what to make of MILA 2.0 when I started reading it, I know for sure that I enjoyed reading Renegade immensely. It was action packed, suspenseful, and ended with me wanting to find out more. Continuing where MILA 2.0 left off, Renegade shows us the journey Mila went on with Hunter to find out more about who she really is. But in doing so, her relationship with Hunter takes a turn for the dangerous as she contemplates whether she really can trust him with the truth or not.

I enjoyed Renegade more than its predecessor because the beginning didn’t start off quite as slow. You have Hunter and Mila interacting with each other, trying to find out what they’re going to do now. While I was frustrated with Mila for not telling Hunter the truth and hated that she kept bringing it up, I was fascinated by their journey into learning more about Mila’s identity. She learned more about who she is in this book, and I felt like it really explained everything that happened up to this point in the story. It explained why she was having memory flashbacks of a life she never truly lived, but also explained why even though she’s an android she has such strong emotions. I enjoyed this book better because I felt like I understood Mila better than before.

I also found this story to be more action packed, which helped too. Because while Mila is with Hunter, she’s still on the run from General Holland so she has to be careful who she trusts. So when she finds Grady, she starts becoming weary of the person she’s traveling with. She starts questioning her decisions and comes up with a plan for what to do next. While I was annoyed that she was continuously questioning Hunter’s motives throughout, I also understood her reasoning for it. I understood because I honestly didn’t understand why she even brought Hunter into this situation to begin with. Yes, he was one of the few people she felt like she could trust in Clearwater, but she barely knew him.

I also enjoyed finally being introduced to the leader of the Vita Obscura. I like how Driza made it seem like she was trustworthy at first, though I was suspicious of her character immediately. She just seemed too nice and it made me very weary of her character. It wasn’t until we see Mila make that terrible decision that her true nature really came out. While I completely understand her part in the story, it really put a twist in the story that I never saw coming.

However, there are some criticisms I do have with Renegade that I didn’t have with MILA 2.0. For starters, while I do overall like her connection with Hunter better than before (despite it being instant love), I found it to be too convenient that his family actually has a role in the story. I also hated that he decided to just come along with her on this trip without fully questioning what was going on and why she’d reached out to him. I also didn’t really understand why she wanted him around knowing that she was putting him in serious danger. I get she really likes him, but I feel like he shouldn’t have really been given a role in this story. Or that if she did talk to him it wasn’t until later after the events that transpired. Don’t get me wrong, I really do like his character and I do understand why he’s in the story. But I don’t know, I feel like romance shouldn’t even really be in this trilogy. And there’s a possibility that this trilogy will become a love triangle, which is something else I’m truly starting to hate in young adult novels. It’s starting to become a cliché in young adult literature for the female character to have two boys fighting for her affections, and I’m really starting to hate it because it’s very unrealistic.

But anyway, enough of that. Another part of the story I didn’t particularly like is when the Vita Obscura leader’s plans are finally revealed through the decision Mila makes. I’m not going to go too much into detail about this part of the story because I want to try the best I can not to spoil it. But basically, Mila makes a decision for herself that doesn’t go particularly well. It actually results in her briefly becoming less human and more android, which in turn leads to a discovery none of us find out about until the end of the story. In this part of the story, Mila makes terrible decisions that affect the lives of others. She also briefly looses the part of herself that made me like her character in order to not deal with the hurt and pain she’s experiencing. I hate that she made this decision because while I do completely understand why she did it, I knew something bad was going to come from it. I also knew that the end result of this decision would be her character being less human and making decisions she wouldn’t make herself. While I enjoyed seeing more of her android side in this moment, I overall hated this part of the story because she did something she would’ve never done. And that frustrated me because her character has been through a lot already and I feel like she didn’t deserve this.

However, despite these two parts of the story, I overall enjoyed reading Renegade.  I enjoyed reading this book because I learned the truth about Mila’s identity, the story was more action packed and fast paced, and we finally were introduced to the Vita Obscura and found out why their leader was interested in Mila. I really can’t wait to finish reading the final book in the trilogy Redemption to find out what happens next to Mila.