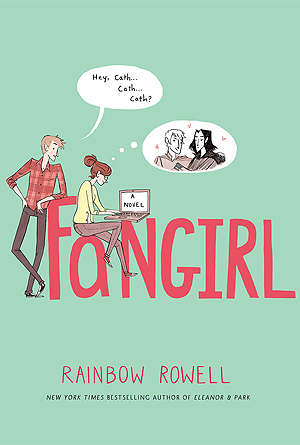 Cath is a Simon Snow fan.

Okay, the whole world is a Simon Snow fan…

But for Cath, being a fan is her life—and she’s really good at it. She and her twin sister, Wren, ensconced themselves in the Simon Snow series when they were just kids; it’s what got them through their mother leaving. Reading. Rereading. Hanging out in Simon Snow forums, writing Simon Snow fan fiction, dressing up like the characters for every movie premiere.

Cath’s sister has mostly grown away from fandom, but Cath can’t let go. She doesn’t want to.

Now that they’re going to college, Wren has told Cath she doesn’t want to be roommates. Cath is on her own, completely outside of her comfort zone. She’s got a surly roommate with a charming, always-around boyfriend, a fiction-writing professor who thinks fan fiction is the end of the civilized world, a handsome classmate who only wants to talk about words… And she can’t stop worrying about her dad, who’s loving and fragile and has never really been alone.

For Cath, the question is: Can she do this? Can she make it without Wren holding her hand? Is she ready to start living her own life? Writing her own stories?

And does she even want to move on if it means leaving Simon Snow behind?

I remember getting this book as a Christmas gift from my grandmother a couple years ago and when I read it feeling disappointed because it wasn’t as good of a read as I was expecting. But I decided to read it once again before starting to read Carry On and found myself enjoying it much better the second time around.

I don’t remember what exactly I disliked about Fangirl the first time I read it, but I can definitely tell you what I’ve enjoyed from this reading experience. One of the things I enjoyed reading this book a second time is how much I can relate to the main character. I don’t know if part of the reason I didn’t enjoy this book the first time was because I couldn’t relate to Cath, but after reading it again, I realize I can relate to her very well. For one, she’s an introvert like me. I can also relate to her because my own college experience involved me spending a lot of time in my room more than going out and socializing with friends. When I come to think of it, I didn’t really have a lot of friends in college anyway due to focusing so much on schoolwork and working at my job that I didn’t really make as much time to spend with friends as I probably should’ve. I also share Cath’s love of the written word and reading. I know most of her love for it is due to one book series in particular, but I still appreciate how Rainbow Rowell makes Cath so relatable to me. That she’s so relatable to me that I feel almost as if this book was written specifically about me. Even her sister Wren’s first year experience at college reminds me of my own sister even though we aren’t twins.

I also appreciate Rowell incorporating fanfiction into the mix. When talking about reading and writing, fanfiction is rarely incorporated into a story. I like how she includes fanfiction in Fangirl by having the main character be so in love with a series that she writes a story of her own with the characters, making them almost as if they are her own. It’s nice to see a story center around the world of fanfiction, something which I don’t really see too often when reading young adult literature. I like it too because the book series Cath is obsessed with sounds very similar to my favorite book series of all time Harry Potter.  Yes, there are obviously some striking differences between the two, but it makes it that much more enjoyable of a read for me because I feel like I can also escape into that world too. It also makes me even more curious about that world, wanting to understand why Cath likes that series so much.

What else I like about Fangirl is Rowell’s writing style. Her writing is very fluid, easy to read and makes reading this story that much more enjoyable to me. She writes like she’s a young adult herself, going through college and trying to survive the outside world. Every piece of dialogue between characters flows naturally, like it has its own unique place in the story. It’s almost as if she’s bringing all of these characters to life with each word written. It makes me feel as if I’m with Cath, following her journey as she experiences her first year of college.

But what I like the most with this book is seeing some of what Cath’s character writes and her relationship with Levi. I like that we get a little snippet of what Cath has written in the past as her Simon Snow fiction increases in popularity so we can see for ourselves how good of a writer her character is. It not only allows us to see her character write, but we are also given a glimpse into that world so we can see for ourselves why Cath loves it so much. I like her relationship with Levi so much because they go so well together. He’s someone when she first started going to college she got along with so well. He’s easygoing, friendly and you can tell he wants nothing more than to make Cath happy. The way the two of them interact together is great because it’s very relaxed and easygoing. To give a good example is whenever Levi becomes curious about Cath’s fanfiction and wants her to read some of it to him. She’s at first surprised that Levi wants to learn more about the world she writes about so much. But she does it anyway because she can see that he really wants her to read it. He’s just one of the characters in the story who seems to get her and they just seem really good together. So I like seeing their relationship grow.

While I overall enjoyed reading Fangirl, there are some criticisms I have about the book that I’m sure others have with it too. For while I like Cath’s character because I can relate to her, there are times when I feel like she’s too unrealistic or acts completely stupid. I feel like Rowell made her too antisocial in this book, almost as if she was trying to create a nerdy character that fits the typical nerd stereotype. To the point where she was avoiding going to the dining hall because of the amount of people that would be in there. To me, all of those moments she refused to interact with people was ridiculous because all the times she did interact with people she seemed completely fine, not at all like she was dealing with any social anxiety. I also think the way she reacted to Professor Piper accusing her of plagiarism was ridiculous. While I get that Simon Snow is a huge part of her life, I think she sometimes forgets she’s in college and that fanfiction doesn’t play a role in academics. This part of the story made me realize that while I do relate to Cath in some ways, she still has a lot of growing up she has to do and that Rowell didn’t really progress her character all too much throughout. While I do get where Cath is coming from, I do also think it would’ve been nice to see Cath have some sort of character development in the story.

Another criticism I have with this book is the lack of fandom in the actual story. We hear that Cath is such a great writer of fanfiction that she gets thousands of hits every time she posts a new chapter, yet we don’t really see her interact with other Simon Snow fans. It’s like she lives in this bubble with just her sister when it comes to Simon Snow that she won’t really let others be a part of. I at least expected her to act like she’s more involved in the fandom since she has such high amounts of followers. But we really don’t get to see too much of that in Fangirl, we just hear about it.  We also don’t really get an understanding of why Cath loves Simon Snow so much. I understand that she and Wren grew up with reading the books and watching the movies, but she never talks about why she loves this series so much that she feels like she has to write a work of her own about it. Again, we just hear about all of this but never get an understanding of why Cath loves this series so much. To me it’s frustrating because I feel like we are reading this story from her point of view, but aren’t being clued into important details that would really make this book shine.

I also have a problem with the ending. It feels like all of a sudden the story comes to a halt with no real conclusion or anything. Cath goes to the bookstore for the release of the last Simon Snow book, is reading it and then the story ends. I’m frustrated that this is how Rowell chose to end this story because I figured we’d at least see what Cath thinks and feels about the final book in her favorite series. Instead, the story ends with no thought provoking conclusion and we are left wondering what’s going through Cath’s mind as she finishes the last book. While it was an interesting way to end, it wasn’t the ending I’d have chosen.

Despite these criticisms I have for Fangirl, I definitely enjoyed giving this book another chance. It was definitely a much better read for me this time around than the first and can’t wait to finish reading Carry On.