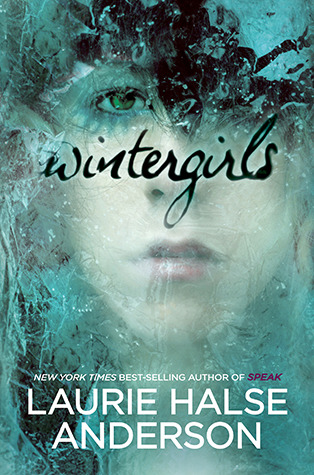 “Dead girl walking”, the boys say in the halls.

“Tell us your secret”, the girls whisper, one toilet to another.

I am that girl.

I am the space between my thighs, daylight shining through.

I am the bones they want, wired on a porcelain frame.

Lia and Cassie are best friends, wintergirls frozen in matchstick bodies, competitors in a deadly contest to see who can be the skinniest. But what comes after size zero and size double-zero? When Cassie succumbs to the demons within, Lia feels she is being haunted by her friend’s restless spirit.

Laurie Halse Anderson explores Lia’s descent into the powerful vortex of anorexia, and her painful path toward recovery.

I didn’t like this story as much as I’d hoped. Lia’s story of battling anorexia is intense. But the writing and characters made it difficult to enjoy, and I’ll tell you why shortly.

First, I’ll tell you what I do like about Wintergirls. It’s an interesting story about a girl named Lia. Dealing with issues of her own, Lia looses her best friend Cassie who she hasn’t talked to in a long time. As she’s dealing with this loss, Lia continues pushing herself to be skinner until she realizes she needs help. While this is going on, Lia gets regular visits from Cassie’s ghost who wants Lia to join her in the in-between. What I like about the story is seeing all of these different elements emerge together. While at times it doesn’t make sense, the way Laurie Halse Anderson brings it all together makes for an interesting read.

I also like that Anderson doesn’t shy away from serious topics. In her novel Speak, which I absolutely love, she talks about rape but does it in a way where you feel like she’s really bringing awareness to the subject. So while this book is definitely not one of my favorites, I appreciate reading a story about a young girl and her struggle with anorexia. I think it’s a good way for people to become really aware of what it’s like to have an eating disorder. I especially like it because you can see it in Lia’s behavior. She’s always aware of the food she eats before she puts it in her mouth. You also see it in the way Lia’s family deals with her eating disorder. They are worried about her well-being throughout that they are keeping track of her weight, hoping to get her back to health again.

What I also like about Wintergirls is the message Anderson is sending her readers. The whole time Lia is struggling with eating, there’s a message she is trying to tell us. The whole story is basically about how you can’t help someone unless they want help, which is a very powerful message. This is apparent with Lia because when her family weighs her, she deceives them by having the scale fixed to be a higher weight than what she truly is. She does this every time without any sign of remorse. Even when the one person she truly cares about finds her in terrible conditions, she doesn’t want help. It isn’t until the end of the book when she almost dies that Lia realizes she wants to live and gets the help she really needs.

I also really like the cover. It looks intriguing, makes me want to read the book and find out what’s going to happen. But it’s also really pretty because it reminds me of the cold, which I don’t mind quite as much as heat.

But there are so many things about this book I didn’t like. For one, the characters are pretty horrible. I feel like there’s no character development with any of them and I had a difficult time sympathizing with them. All of the characters were really flat to me because I couldn’t get any sense of personality from them. For example, Lia is supposedly shy, but Anderson never gives us an example of how she’s shy or anything. I also had a hard time sympathizing with Lia or her parents because of the way they treated each other. Lia’s biological parents are hardly around and when they are, there so focused on work or obsessed with getting Lia to eat. But Lia doesn’t treat them any better either, especially her mother, who seems like she wants to help. The only parental figure in the story I felt any sympathy for was Jennifer because she acted more responsible than even Lia’s father. She’s the one parent in the story I felt any sympathy for because you can tell she cares about Lia and wants to get her back to health. I also hated Lia because she just wasn’t at all likeable to me. I get she has an eating disorder so she’s going to act extremely selfish, but damn. She’s probably one of the most coldest and unfeeling characters I’ve read in a young adult book. I just felt nothing for her but pity and sad because if her character was more developed, I could’ve liked her.

I also had a hard time enjoying Wintergirls because the writing is terrible. There was nothing that kept me reading this book other than hope it would get better. It was a read I made the decision to keep exploring, but there were many times I wanted to stop and not finish, it was that awful of a read for me. The most interesting thing about it to me was reading all of the crossed out words and seeing how Lia kept count of the amount of calories in the food she ate.  I also didn’t like the writing because it didn’t feel clear to me with certain moments what was going on. For example, I didn’t realize Cassie’s spirit was visiting Lia until she mentioned wanting to make sure Cassie’s body was being put into the ground. This story is so poorly written that I’m still surprised I finished reading this book.

The plot of the book is just as bad to me too. One example is Elijah’s character being in the story. I felt like he didn’t add anything important to the plot or played any sort of purpose that made sense to me. He just happened to have a room in the same motel Cassie stayed in when she died and that’s it. He also calls Lia after Cassie’s death, but you never find out why. There also wasn’t any explanation for anything, like how Lia developed her eating disorder. You know she and Cassie made an oath to each other during the New Year, but there’s no explanation of how this started for either of them. My guess is that their friendship sparked these problems, which would make sense to me. There’s so much in the story that isn’t explained it made the story difficult to read.

I know I’m in the minority when I say I dislike this book. I know a lot of people enjoyed reading this from what I saw on GoodReads, but I’m definitely not one of them. I appreciate it talks about anorexia because eating disorders are a topic that needs to be discussed. But there were so many things with the way it was written and the plot that I had a hard time enjoying it. To me, its just not a good read, as unpopular of an opinion that may be.