Book Review: The Girl On the Train 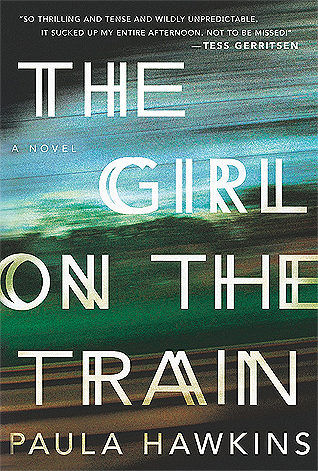 The debut psychological thriller that will forever change the way you look at other people’s lives.

EVERY DAY THE SAME

Rachel takes the same commuter train every morning and night. Every day she rattles down the track, flashes past a stretch of cozy suburban homes, and stops at the signal that allows her to daily watch the same couple breakfasting on their deck. She’s even started to feel like she knows them. Jess and Jason, she calls them. Their life—as she sees it—is perfect. Not unlike the life she recently lost.

And then she sees something shocking. It’s only a minute until the train moves on, but it’s enough. Now everything’s changed. Unable to keep it to herself, Rachel goes to the police. But is she really as unreliable as they say? Soon she is deeply entangled not only in the investigation but in the lives of everyone involved. Has she done more harm than good?

This book is overrated. I read this story because I was itching to read a thriller story, but was severely disappointed.

The Girl On the Train is a good thriller story, but has so many plot holes that it makes it hard for the reader to enjoy the story. What made this story so thrilling to me was when Rachel couldn’t remember what happened the night Megan went missing. This made me excited because I wanted to find out what happened, wanted to figure out how the pieces would fall together. But then once I did find out, I was disappointed because I expected something more from this book. There were so many directions Paula Hawkins could’ve taken the story to reveal the killer to the reader. This was exciting to me too because it opened up the possibility that the killer could be any one of these people and for different reasons. But once Hawkins revealed who the killer was, I wasn’t happy with the decision. I was unsatisfied because there were no clues that this person was responsible until the last twenty pages. And even then, I felt like the character in question went through a complete change without any real explanation. I felt cheated because I expected someone we hadn’t been introduced to was involved.

The reason I find the plot lacking in this book is because things just sort of happen without any real explanation. For example, we are introduced to the character Andy, a guy Rachel bumps into the night Megan goes missing. But we don’t really get much from him other than Rachel spotting him near her when she’s on the train. And whenever Rachel does finally talk to him, it’s for a really brief time and that’s it. Throughout the story, you think he’s going to play a major role later on. But then once you find out his role, you are left feeling disappointed because he ends up being a minor character this whole time. Another example that comes to mind is Rachel’s relationship to Scott throughout The Girl On the Train. It’s pretty up and down throughout the book because she lies to him in order to get involved in his life. When she first reaches out to him, he’s interested in talking to her and finding out what she knows. Then from there, things get a little weird. He confides in her, believing her to be a good friend of Megans’. It’s almost as if he depends on her because of the little piece of information she has about Megan. Then when he does find out Rachel didn’t know his wife, Scott overreacts, making it easy for the reader to believe he’s responsible for her disappearance.

My least favorite aspect of reading The Girl On the Train was the characters. While I enjoy reading a story where the characters involved have serious flaws, I just couldn’t enjoy any of the characters here, because they were one dimensional too. For example Rachel is an alcoholic. Throughout the book, she drinks even after saying she’s going to quit or lay off the booze for a little while. But then she goes back to it again and again, resulting in her making terrible choices throughout the story. In many ways, it makes her unreliable because the reader doesn’t know if she’s telling the truth. But she continues doing it anyway. I also just didn’t like any of them either because they were completely unsympathetic.

The only thing I enjoyed about this book is that it kept me reading until the end. Despite not liking the characters or the story, I was still curious to see how everything unfolded and was glad when it was finally over.