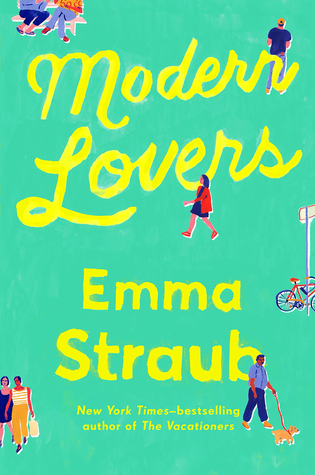 From the New York Times‒bestselling author of The Vacationers, a smart, highly entertaining novel about a tight-knit group of friends from college—their own kids now going to college—and what it means to finally grow up well after adulthood has set in.

Friends and former college bandmates Elizabeth and Andrew and Zoe have watched one another marry, buy real estate, and start businesses and families, all while trying to hold on to the identities of their youth. But nothing ages them like having to suddenly pass the torch (of sexuality, independence, and the ineffable alchemy of cool) to their own offspring.

Back in the band’s heyday, Elizabeth put on a snarl over her Midwestern smile, Andrew let his unwashed hair grow past his chin, and Zoe was the lesbian all the straight women wanted to sleep with. Now nearing fifty, they all live within shouting distance in the same neighborhood deep in gentrified Brooklyn, and the trappings of the adult world seem to have arrived with ease. But the summer that their children reach maturity (and start sleeping together), the fabric of the adults’ lives suddenly begins to unravel, and the secrets and revelations that are finally let loose—about themselves, and about the famous fourth band member who soared and fell without them—can never be reclaimed.

Straub packs wisdom and insight and humor together in a satisfying book about neighbors and nosiness, ambition and pleasure, the excitement of youth, the shock of middle age, and the fact that our passions—be they food, or friendship, or music—never go away, they just evolve and grow along with us.

I found this book to be a comfortably light read. A book to be read whenever you’re in no hurry to read anything else. Part of the reason is because the cover of Modern Lovers is very cutesy and comforting that it made me want to take my time reading this book.

The book as a whole is okay. I enjoyed the storyline because it was simple. The problems the protagonists encountered were pretty one dimensional because they were fixed very easily without given another thought. This book was a pretty simple read, something I didn’t have to give too much thought to.

I also enjoyed reading Modern Lovers because of the multiple points of view. Throughout the book, each chapter is from the perspective of a different character. I enjoyed having all of these different perspectives because even though these characters were pretty simple, it gave the reader a better insight into each of their lives.

I also like that it is a coming of age story. As the three band members in the story are getting older, their children are becoming adults, trying to figure out what they want to do next in their lives. I really enjoy reading these type of stories because they show contrasts between the two generations very well.

However, there are also some things about this book I didn’t absolutely love. For one, I feel like all of the characters in the story are pretty flat. In Modern Lovers, you get the tiniest of character background of everyone, but it’s not enough to heavily contribute to the story.

I also didn’t particularly like that none of the conflicts in the story were really solved. If anything, I felt like all of the conflicts in this story were just pushed to the side to deal with later. Or handled in a way most people wouldn’t. A perfectly good example is Zoe’s marriage. Neither one of them ever actually had a conversation about why their marriage was getting bad. Then all of a sudden, it was good again. While the different conflicts in the story were interesting, I don’t agree at all with the way any of them were handled. It was unrealistic because that’s not how conflicts between adults are handled. When you have issues with someone, you talk about them and work together on how those issues can be resolved. You don’t just pretend like there are no problems and hope they go away on their own.

I was also disappointed that the story didn’t talk a bit more about their band. I was hoping we’d hear more about the inner workings of the music industry during the time. Instead, we were given a couple brief flashbacks about the mysterious fourth band member who became famous before she died. While I didn’t mind hearing more about Lydia and how her death impacted the rest of the members in their current lives, I wanted so much more from this part of the story but felt like I never got anything substantial. Just that they formed together during their college years and then disbanded one day.

While I found the simplicity of this book to be quite enjoyable, at the same time I was also hoping the storyline in Modern Lovers to be a little more complex and the characters to have more of a personality. But despite these issues, Straub crafted a wonderfully written simple story that made for a good light read.