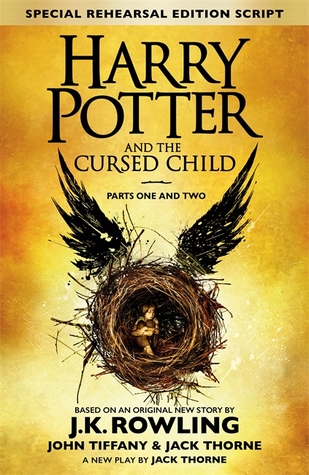 Warning: This book review contains spoilers of some of the events that unfold in this book. Viewer discretion is advised for those interested in reading Harry Potter and the Cursed Child.

Based on an original new story by J.K. Rowling, Jack Thorne and John Tiffany, a new play by Jack Thorne, Harry Potter and the Cursed Child is the eighth story in the Harry Potter series and the first official Harry Potter story to be presented on stage. The play will receive its world premiere in London’s West End on July 30, 2016.

It was always difficult being Harry Potter and it isn’t much easier now that he is an overworked employee of the Ministry of Magic, a husband and father of three school-age children.

While Harry grapples with a past that refuses to stay where it belongs, his youngest son Albus must struggle with the weight of a family legacy he never wanted. As past and present fuse ominously, both father and son learn the uncomfortable truth: sometimes, darkness comes from unexpected places.

I just recently finished reading this book and I’m not completely sure what I think of it. I liked reading it because I was brought back into the wizarding world and was reunited with Harry and his friends and family. Just starting out, I was enjoying it because it felt so nostalgic and good.

But at the same time, I wasn’t overtly pleased with it either. The plot itself was interesting, making me want to read more. But the storyline also had so many holes in it that I found myself questioning what I was reading.

I enjoyed being brought back to Hogwarts and getting to meet Harry’s youngest son Albus. I also enjoyed Albus’s friendship with Draco’s son Scorpius. I thought they were really great together and loved seeing Albus at least had one friend during his time at Hogwarts.

What I enjoyed about the plot with the Time Turner was how they allowed me to relive certain parts of the series. I love how those moments going back in time allowed us to go down memory lane and relive some aspects of the series for a second time. It made me feel like I was reading the books all over again and put a smile on my face.

I also enjoyed reading Harry Potter and the Cursed Child in another format. As someone who doesn’t read plays that often, I thought it was an interesting way of presenting the story. It made me even more interested in reading it to find out what happened next.

However, I had a lot of issues with the plot and Harry Potter and the Cursed Child as a whole. For one, I didn’t like the way they portrayed Harry, Ron, and Hermione’s older selves. With Harry, I wasn’t completely surprised at his inept ability to be a good father figure. I actually expected it. But I feel like they completely changed all of their characters. For example, I felt like they made Ron to be the typical “funny guy,” in the story, but I honestly didn’t find what he said to be hilarious. With Harry being a bad parent, they made him to be a complete jerk towards Albus in a way that I didn’t think was necessary. I get that Harry doesn’t know how parenting works, but I just feel like he was just completely disregarding his son’s feelings and not trying to understand how being his son puts a lot of pressure on Albus. With Hermione, I feel like they made her not quite as intelligent. A perfectly good example is whenever Albus drinks the Polyjuice Potion and turns into Ron so they can steal the Time Turner. Hermione doesn’t realize he’s not her husband during the whole incident even though he does an awful job at pretending. She also hides the Time Turner in her office on her bookshelf, which in my opinion is a stupid move on her part.

I also feel like they completely cut out some of the characters who should’ve been in the story. For example, they didn’t have Harry’s godson Teddy in the story and I feel like his other two children played a very minor role overall. That disappointed me because I thought there would’ve been more interaction between their children. I feel like the lady on the trolley was given more plot in the story than the rest of Harry’s kids.

I hated that there was no real explanation for why the Time Turners were destroyed to begin with. I get that they probably destroyed them because they didn’t want anyone trying to go back in time and bring Voldemort back. But with the way wizards were about going back in time in Harry Potter and the Prisoner of Azkaban, I figured someone going back in time to change the past wouldn’t be a real issue at all. Not to say I didn’t enjoy the concept because I did find it interesting. I just wasn’t completely sold on how Thorne carried it out.

I found the thought of Voldemort having a daughter revolting. Mostly because to me, it really didn’t make any sense. Especially when reading the rest of the series and the way he was towards other people, including his own followers. Yes, Bellatrix Lestrange worshipped the ground he walked on, but he never once showed the same interest towards her. The only way I could honestly see Voldemort conceiving a child is through rape, which is what I thought happened until near the end of the play. However, I did like her character and thought she made for a great villain.

I know I need to keep in mind that this story is written in play format so it’s not going to be exactly the same as the other books in the series. But at the same time, its marketed to be the next book in the series so I’m having a difficult time not looking at it as such.

I think the story itself is enjoyable despite all of these plot holes I saw when reading it. I can definitely see some kernels in the story that if expanded would’ve made Harry Potter and the Cursed Child a much more enjoyable read. But I also get this story is meant to be a play so Thorne couldn’t expand on the story as much as I’d like. I definitely think looking at this book separate from the rest of the series will help you enjoy it in the long run and I hope as time goes on I’ll be able to do that myself.

11 thoughts on “Book Review: Harry Potter and the Cursed Child”