Spyro the Dragon is the first game in the series, which introduces you to the character Spyro, a small purple dragon. He must save his dragon elders from Gnasty Gnorc, who turned all of the dragon elders in the land into stone along with collect all the gems and eggs in the various worlds you travel to defeat this nasty villain. As Spyro, you fly from platform to platform, charge and flame your enemies as you travel across all of these worlds.

As a child, this video game made me fall in love with the Spyro series. It was one of many video games from my childhood that introduced me to platforming in video games. I remember many moments as a child traversing through the different worlds, flaming and charging enemies while releasing the elder dragons from their statue prisons.

I enjoy Spyro the Dragon because of its unique charm. As a child, most aspects in the game didn’t catch my eye as being cheesy. However, now that I’m older, they catch my attention and cause me to giggle in childish glee. One good example has to do with the enemies in the image above. Whenever these enemies go to hide from Spyro in these tents, they either cower in fear or moon you when you flame their hiding spot. As a child, I didn’t see the humor in this, but now that I’m older, I find it funny.

I also enjoy playing this game from my childhood because I love playing as Spyro and the challenges each world brings. I love getting to play as a small dragon who can flame as well as charge at his enemies. He is also able to fly, which allows you as the player to get to platforms you couldn’t otherwise reach. I also enjoy the worlds you get to go through because each one of them is unique and presents their own different challenges to the game. Some levels in the game have really high platforms that if you aren’t able to fly across will cause Spyro to fall into the abyss while others have water or some other obstacle that if you land in will cause Spyro’s health to deplete. And other worlds have super charge boosts, which are usually useful when getting to difficult platforms that flying won’t help you reach. 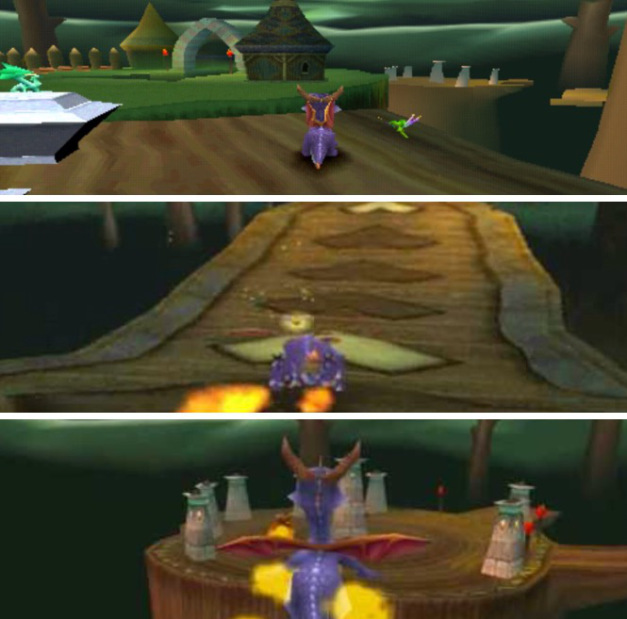 Images from one of the most difficult levels in the game Tree Tops.

Spyro the Dragon is also enjoyable because of the challenge it presents to the player. Some of the platforms you have to get onto are really high up or very difficult to reach to where you have to use other platforms to get onto them. This presents a challenge for the player especially if you are trying to clear the game by getting all of the gems, dragons, and eggs. Part of this challenge can be seen in the timed flying levels where you have to go through obstacles before the timer runs out. While you don’t gain anything unique from completing these levels, by doing so you collect all the gems in those levels and get closer to completing the game.

Now that I’m older and playing Spyro the Dragon, I remember a lot of my recent experiences playing this game. I remember playing it last summer the amount of fun I had and now try the best I can to completely clear the game and having fun doing so, which is why I’m playing it again. I look forward to continue playing this series and continue reliving memories from my childhood.