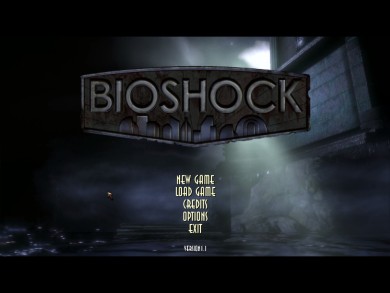 Bioshock is a first person shooter, adventure game. Developed by 2K Boston, Bioshock takes place in the 1960’s and centers on the main character Jack. After surviving a plane crash, Jack makes his way into an underwater city named Rapture. Created by the business magnate Andrew Ryan, Rapture was intended to be an isolated utopia. However, the discovery of ADAM, a genetic material that gives people superhuman powers resulted in the cities rapid decline.

In Bioshock, Jack is trying to escape from Rapture, fighting hordes of enemies obsessed with ADAM and creatures like Big Daddies while interacting with the few humans who remain to learn more about Rapture’s past. Playing as Jack, the player gets to use not only weapons to shoot enemies down but also different superhuman powers, such as Incinerate and Telekinesis. These different abilities give the player a vast array of opportunities to kill their enemies, giving the player a unique gaming experience. 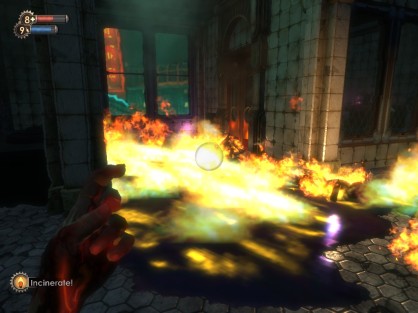 Bioshock is truly an amazing gaming experience. As a rookie computer and first person shooter video game player, I was immediately hooked into playing this game. Bioshock had just all of the right elements to get me immersed into the world of Rapture and wanting to learn more about what happened to this beautiful city.

Bioshock is a video game that interested me from the start because of how interactive the game can get the player. This interaction can be seen through fighting enemies and listening to the diary entries of the different people who once lived in Rapture. Fighting enemies gives the player a sense of interaction because you get to kill enemies from a first person perspective. You play as Jack and get to control his movements as he kills his enemies using all of the different abilities in his arsenal. The diary entries also provide an interactive experience in Bioshock because they give the player more detail to the story. These journal entries help explain pieces of the puzzle that aren’t already unlocked for Jack and tell the player more about the people who lived in Rapture and what happened to them.

Another aspect of Bioshock that gets the player immersed into the game is the music. The music in this game is truly creepy and made me feel as if I were playing a horror game. Having this music to the game while fighting enemies gave me chills. This music contributed so much to my feelings of horror that when enemies appeared out of nowhere, I found myself jumping in my seat.

The one aspect to Bioshock that I’m still getting used to is the player controls. Since I don’t have a whole lot of experience playing first person shooter and computer games, I’m not yet used to how controls in these types of games work. Because of my lack of experience, whenever I find myself facing Splicers and other enemies, I often end up feeling turned around and confused trying to get the controls down so that I can kill them. The player controls also have me frustrated too because I find myself getting stuck at parts in the game because of them.

However, Bioshock is a truly marvelously beautiful game. My experience with it has so far been a wonderful one and I can’t wait to see where this game takes me.